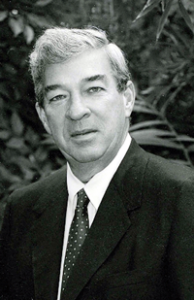 The Pecos River Resolution Corporation was the vision of PD Sams,

without him this project would not have been possible.

Perkins Daugherty Sams passed away on Sunday, January 3, 2010 in Midland, Texas at the age of 82.

Perkins was born on September 4, 1927 in Deland, Florida to Murray and Genevieve Sams. He attended the University of Virginia before enlisting in the Army and serving on the Manhattan project in Los Alamos, New Mexico. After the service he embarked on an oil and gas career for a five year tenure with Gulf Oil Corporation (1951-1956) in their Land and Exploration department before becoming an active independent in 1956. As an independent he worked many of the major hydrocarbon basins in the U. S., including the Permian Basin, Texas Gulf Coast, East Texas, Louisiana, Mississippi, Alabama, Florida, the Rocky Mountain Region, California and Alaska. He had offices in Denver, Midland and Houston and notable discoveries of the Moore-Sams Field in Louisiana, Indian Hills Field in North Dakota and Sand Dunes Field in Wyoming among others. In addition, he had international experience which included two concessions in Somalia and one in the Sudanese Red Sea. During his career, he has owned and managed a cable tool company, a pipeline company and an oil and gas holding company. He has owned an auto dealership, a newspaper and has been active in real estate including ranches in Colorado and Texas.

Perkins had many interests and in the pursuit of these interests always demanded the best, as Midlanders who knew his garden can attest.  He assembled and collected the largest private collection of Gems and Minerals in the world. The Ann and Perkins Sams Gem and Mineral Collection which is  housed in the Museum of Natural Science in Houston and is considered the best collection in the world. He was a fantastic cook and a great storyteller.  He was an avid hunter and fisherman but also a conservationist which is noted by his management of his Taylor River property in Colorado and his service on the Texas Parks and Wildlife Commission. Most recently, he created the Pecos River Resolution Corporation, a nonprofit created to study the river, determine its best use and resolve what is needed to accomplish that mission.

Perkins was preceded in death by his parents Murray and Genevieve Sams, his first wife Elizabeth Bradley Sams, his daughter Elizabeth Sams, his brother Francis Sams and a grandson, John Perkins Foretich.

The family wishes to thank the doctors, staff, and support personnel of the Cleveland Clinic, The Allison Cancer Center, Hospice of Midland, Dr. William Kiser and Dr. Gregory Bartha.